Critical Mass provides another reason why not to trust book reviews on Amazon.com.

Americans hardly ever pay attention to electioneering in other countries. But it’s hard not to gape at the Liberal Democrats’ surge last week with their leader’s JFK-like debate performance.  Nick Clegg’s success won’t lead him to the top job but makes a  hung parliament far more likely.  In any respect, his  breakthrough last Thursday was a key televisual event likely to be a set-piece in future British histories.

Taking a long view, it’s the differences between our two countries’ politics that stand out. The British Liberals have (with some modifications) been around as a third party for most of the twentieth century, a trend that the UK parliamentary system has made possible.  Our own system killed the Whigs and the Populists dead as soon as it became clear that the two “major” parties had a lock on the winner-take-all presidency.

The deeper history of the British Liberals reveals even starker differences.  Founded in 1859, they had their day in the sun under Gladstone and then faltered after Lloyd George.  They soldiered on with a particularly developed sense of continuing relevance (even as most voters thought otherwise).  This was mixed with a pretty strong collective consciousness of their past, nurtured by archive-based historical work on party history.

The two main U.S. parties have likewise persisted but have lacked the same stable sense of who they were.  To say the least. To make the point quickly, compare the electoral map of the 1860 and the 2004 elections.  Same two parties.  But an almost total switch in geographical alignments.  And a similarly dramatic about-face in some of the most important matters of ideology.

Historians are not only “students of history”.  We also make history.  Without us, the story of the past is lost as soon as its living memory fades.  In the High Middle Ages, when writing about secular affairs was still so unusual that to do so needed justification, historians and scribes often argued that their work served to prevent the “forgetfulness of those alive today, and the ignorance of those who live in the future” (I am translating from an early thirteenth-century Latin charter typical of the age).  Historians stand between memory and oblivion.

I was reminded of that role while reading Valerie Hemingway’s Running with the Bulls: My Years with the Hemingways (New York: Balantine Books, 2004).  First, a disclosure: I don’t find Hemingway’s work very interesting and appear incapable END_OF_DOCUMENT_TOKEN_TO_BE_REPLACED

There was lots to keep track of last week during the Bill T. Jones / Arne Zane performance of “Fondly do We Hope, Fervently do we Pray” over at the Hopkins Center.

In the midst of the fabulous dancing, I found myself perversely wondering what Nathan Lord would have made of this Lincoln-fest coming to Hanover and getting a standing ovation. Lord enjoyed the second longest tenure of any Dartmouth president. It would have been the longest had he not been fired by the Trustees in 1863, when he objected to Lincoln receiving an honorary Dartmouth degree.

Lincolnphilia nowadays extends well beyond the Dartmouth campus. The sixteenth president’s stock has been rising for some time and may have peaked last year with the bicentennial of his birth and with the inauguration of another Springfield, Illinois lawyer (this time a Democrat), who donned the Lincoln mantel while running for president.

The challenge for Bill T. Jones lay not in paying homage to a leader with so many devotees. What was fascinating about the production was its attempt to re-inject controversy into the Lincoln legacy. Associating the issues of the 1860s with today’s hot-button fights about immigrant rights and the uses of war allowed Jones to recall how Lincoln’s “greatness” operated in a context of enormous hostility. It reminded us (as the Nathan Lord example does, far less effectively) of just how contentious Lincoln was during his actual presidency.

A more publicized story of Civil War memorialization has generated an ongoing controversy filled with far more heat than light. On the morning that “Fondly do We Hope” debuted in Hanover, the new governor of Virginia resurrected “Confederate History Month” for the first time in eight years. Governor Bob McDonnell did not mention the role of slavery in sparking the war, nor did he list emancipation as one of its results. An understandable outcry forced him later to acknowledge slavery, though few critics were placated.

The Virginia story, and its continuing fallout, caught my eye and not only because I had spent the day thinking about Lincoln. About ten years ago, the politics of Confederate symbols informed the shape, audience, and reception of my first book. Since then, I’ve followed ongoing attempts of “neo-Confederates” to circulate a deeply ahistorical view of the Southern past.

Neo-Confederate controversies rage every few years, and I’ve taken these as evidence that the Civil War remains America’s “felt history” (to borrow from the poet Robert Penn Warren). Yet does this square with Bill T. Jones’s efforts to put more fervency into our fondness for Lincoln? To what extent can we say that Americans remain divided by the American Civil War? How does the apparent unanimity regarding Lincoln fit into this equation?

Answers to such questions depend on what sectors of national life we care to examine. My suspicion is that while region and race continue to drive popular understanding of the 1860s, political ideology, as expressed by the Right, has become a vital force in how public memory works in the age of Obama. To understand neo-Confederate celebrations requires looking at the resilience of “Lost Cause” among conservative white Southerners. But we need also to situate McConnell’s decree in another context — aside Tea Party nods to the founding, Glen Beck’s assault on Teddy Roosevelt’s Progressivism, and the Right’s increasing disparagement of the New Deal. In this respect, rooting for Confederates has become part of a reactionary tapestry of history . The otherwise dour President Lord would have been delighted.

Over at Crooked Timber, Henry Farrell uses Albert Hirschman’s famous Exit, Voice, and Loyalty: Responses to Decline in Firms, Organizations, and States (Cambridge, MA: Harvard University Press. 1970) to consider the impact on church membership of the recent scandals in the Catholic Church.  Will Catholics “exit” the church in response, or might there be a sustained call for reform?  Farrell notes that the Church’s structure, ill-suited for input from below, prevents any response by “voice” ; he concludes:

Senior figures in the church have been muttering for years that, if it comes down to it, they would prefer a smaller and more orthodox church to one which had more members but had to accommodate greater heterodoxy. I suspect they are about to get their wish, although I imagine that they would prefer that it occurred under somewhat different circumstances.

Historians, especially medievalists like me, are usually circumspect about applying modern models to institutions created almost 2000 years ago. All too often we end up with Procrustean beds, having trimmed the subject of all ancient trappings in order to fit the model but potentially sacrificing the primary characteristics in the process.  Farrell recognizes the problem (“If the Catholic church were a normal organization that was even moderately responsive to external feedback …”) but he is wrong, I think, to suggest that the problem does not involve theology.  According to traditional doctrine, the essence of the Catholic Church is its transcendental or sacramental function.  As St Augustine taught long ago in his dealings with the Donatists, that transcendental function is immune to the moral failings of its officials.  For traditional Catholics, therefore, the Church continues to fulfill their needs irrespective of past errors or inept hierarchical responses to those errors.  Besides, “exit” is not on option for traditionalists on the principle of “no salvation outside the Church”; these traditionalists are also the least likely to raise their “voice”, given the governance of the present Pope.  For “liberal” Catholics on the other hand (I am using the term liberal in the American sense), the hierarchy’s action or inaction is of little relevance to their faith.  In my, admittedly limited, experience with liberal Catholics today, their membership of the Church does not rest on what Rome does or says—indeed quite the opposite, it sometimes seems.  In other words, to treat the issue as one that offers disgruntled consumers a choice between shopping elsewhere or demanding a word with management is really not terribly useful.

But if political science or economic theory does not inform us very much, can history be a better guide?  It is not, to put it mildly, as if the Church has never experienced a crisis or a call for reform, other than the obvious (and calamitous) example of the Reformation itself.  The best parallel I can think of is the Gregorian reform of the late eleventh century, which (surprise!) also implicated immoral priests and self-serving management.  Come to think of it, here we have a nice example of reform implemented from above –hence the name, derived from the leadership of pope Gregory VII, 1073-1085–but broadly responsive to ideas and attitudes generated in the community at large.  That reform did not come easy, however, took several generations to be carried out, and was in the end not entirely succesful.  It also relied on a much broader agenda of reform in which priestly morals played only a small part.

More historical perspective: I often wonder if pope Benedict XVI, in his thinking of the present problems, is not, consciously or unconsciously, recalling the Nazi show trials of priests and monks for child abuse in 1937-38, at the height of the Kirchenkampf, when he was a young boy/man.  It would help to explain (though it certainly is not the sole reason for) the current, persistent self-identification, in Vatican circles, of the Church as a victim of an orchestrated campaign.

For those of you finishing their history PhD and eyeing the job market, our very own Dana M. Polanichka (’02), fresh from a UCLA PhD (2009) and newly hired by Wheaton College, offers hands-on advice in Getting an Academic Job in History (Washington D.C.: American Historical Association, 2009), which you can order here. 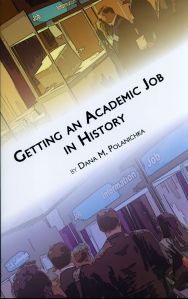 From how to read job ads to writing thank-you notes, from how to put together a teaching portfolio to what to do with academic search wikis (“Probably the best bet is to set wiki breaks and only check the wiki pages then. Try also to stick to the posting pages and avoid discussion pages that tend toward the obsessive and desperate.”, p. 39), Polanichka explains it all. And when on the morning of that big interview, standing in front of the mirror, you wonder if you want to wear that nose ring, the answer is: “No” (p. 46).